Back to all posts

The best part of summer to me is the trees. Not just the leafy bower, nor just the fresh verdancy of the leaves. It's the sound of the leaves as the wind dances within them. To me, it is almost as the ocean, waves singing onto a shore of bark and stem. A marriage of earth and sky. By my house, there are grasses that wave, they seem to form almost overnight, like a silent army arising from the hiding place of winter. I desire always to walk through them, to let my fingers trail upon the fertile heads, and trace the circling patterns. There are waves to be found here too, the impression of the wind as it passes over the land. Such beauty here. Yesterday I was at the Arrata Opera Center, filming for a video on my song, Light. This all started last year, when I put out a call for pictures completing the phrase "The light inside...". I received some beautiful pictures, and have faithfully kept them in a special file on my computer. Still, I needed some other footage, and finally shot a little bit yesterday. My friend and fellow singer, Catherine Gell, came with me, so we could film for some of her songs as well. When I walked into the room, my heart was full of excitement, for the normally curtained windows (I was told they are always blacked out) were unveiled and the light poured through the stained glass, amber in it's descent. I might have given a small squeal of joy when I saw that ~smile~. Sometimes light seems to have it's own texture, a weighted presence in the room. It was it's own character here, a host introducing us to a sacred dance. We moved the piano such that the light pooled onto it and spent the next couple of hours, trying out different angles and living in the beauty of a building that has settled into itself. It had a mature cogniscence, and I wished I could have spent more time there. It would be a fabulous location for a photo shoot! There will be one more call for pictures for this video....I am going to wrangle up some examples first, over the next couple of weeks, and then post about it. 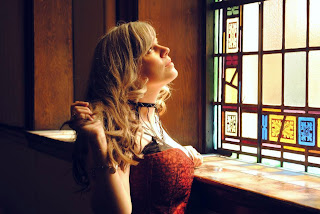